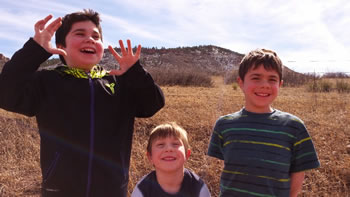 In 2007 the Romito family was hit with devastating news, Dominic was diagnosed with Duchenne Muscular Dystrophy (DMD). The neurologist explained to them that Dominic’s muscles would rapidly deteriorate, he would lose the ability to walk, to use his arms, the ability to take care of himself. Eventually Duchenne would attack his heart and lungs and the disease would take his life.

Richard asked the Doctor what do we do? The Doctor replied “Nothing”. It’s 100 % fatal. Take your son home, love him and provide him with the best quality of life possible.

Richard and Jamie had two more children Collin and Kaleb and they too have been Diagnosed with Duchenne Muscular Dystrophy. The devastation had just increased times three. As a parent, one of the most anticipated milestones of parenthood is a child’s first step. We watch with pride as our deepest love toddles towards independence. Cheering them on, we think about the changes their simple steps set into motion. Our hearts thrill with the promise of the future.

For Richard Romito,this is one of the few places he uses the word “can’t”. He can’t take the place for any one of his three sons, living with Duchenne Muscular Dystrophy. “Can’t… is not an option. I will make a difference.” Richard, a police officer in Colorado, wears his uniform with pride, but the role of officer, pales in comparison to his role in the DMD community. Richard is committed to providing fulfilling life experiences for his children, and others living with DMD. Through his development of the Romito Foundation, Rich provides a yearly DMD camp for the Rocky Mountain region. The foundation also takes these kids on outings during the year, such as fishing, sporting events and providing much needed social opportunities. 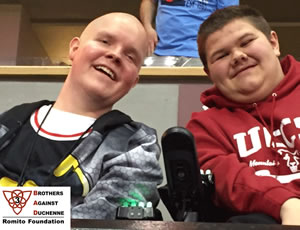 The Romito Foundation takes the Warriors battling Duchenne Muscular Dystrophy to fun events that all kids should be able to enjoy.  Your donations make that possible!

Please consider sponsoring an upcoming
event for one seat ($50 per seat).
We have 2 upcoming events (10 seats available each) scheduled.

How You Can Make A Difference: